This week’s Top Ten Topic is “Books I Can’t Believe I Read”.  I’m not 100% on how this should be interpreted, but I’m going with “I can’t believe I read it and didn’t DNF it!”.  I’m sure others will look at this differently.

In no particular order: 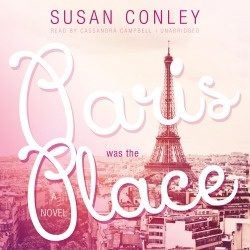 I only finished this book thanks to the Audiobook and listening to it at work.  I only finished it because I had just started this book club and I didn’t want to be the only one to NOT finish it – turns out I was the only one to ACTUALLY finish it – everyone else gave up at 100 pg (where I had wanted to lol).  I was bored the entire time and couldn’t keep majority of the different POV in order.

3. Paris was the Place by Susan Conley

This was another book that only got read because of an Audiobook.  I remember again being bored and depressed.  I vaguely remember someone had a terminal illness (cancer or HIV). This story took place in the 80s? maybe?? Clearly the story really captivated me lol.

4. Perks of Being a Wallflower by Stephen Chbosky

I think I was in the minority in not liking this book.  I keep seeing people loving this book and even Goodreads’ rating is sitting at 4.21.  I just found the characters so unrelatable/unlikable.

This is another one I don’t remember exactly why I didn’t like it, but I remember not finding it relatable.  I also think it was a slower read for me.

They were vanilla – that’s all I have to say!

Again, another unpopular opinion, but I really didn’t like this book.  The writing style frustrated me – although I understand the reasoning behind it.  I also really wanted to like the actual story – it was intriguing, but try as I might I just ended up not liking it and vented the entire time I was reading – quick read though I will give it that lol.

I actually didn’t hate this book.  Why am I including it then?  Because I just didn’t find it interesting.  Compared to The Giver and Messenger (#3) it was just dull.  I didn’t feel like I would truly miss anything if I had of skipped this one – only a couple payouts in future books.

If I tried to tell you what this book was about, I would fail.  I do remember reading it and then thinking “well that’s done”.  My husband asked me if he should read it next and I said “meh”.  He laughed and has yet to read it.

This book made me hate Flash!  I was bored and he wasn’t as funny as I’m use to.  I didn’t pick up another Flash comic since I read this one in 2014.  Although I am now curious how the Rebirth versions are.

Let me know what you think of my list.  Did I pick some books that are your favourite? Did I miss any that should be on here – or that I should avoid at all cost for the same reasons?  Tell me below in the comments.

This week’s Top Ten Topic is “Books I Really Liked but Can’t Remember Much/Anything About”.  Mind you, I guess I kind of cheated a bit by picking series – but if I can’t remember the last one in the series, can I really remember them all??

1. Lola and the Boy Next Door by Stephanie Perkins

So I had completely forgot I had even read this one.  I’ll see it in a Thrift store or a library and think “well I really should pick that up one day and see if I like it”.  Turns out I already had – I gave it 4/5 Stars!

I read this entire series – giving each one 4/5 Stars – you would think I would remember something!  All I can manage to remember is that the series takes place in something like a Prep School for the gifted (or smart or something).  They go to live there and then their families forget them.  Then I remember the story starts to get really weird and I start to get lost.  But I do remember liking the weirdness, so…

3. The Boleyn King by Laura Andersen

Again, I remember loving this series!  I love anything about the Tudor Families – Boleyn being King Henry VIII’s second wife (spoilers she’s beheaded).  But this series is a little different.  It’s a fictional history, one where they ask “what if Anne Boleyn had actually given birth to a baby boy?” This series follows that boy and his small group of friends.  I remember romance and drama – but nothing much else.  I had highly recommended this to someone one Facebook the other day, but when I went to say what happened and why I loved it, I couldn’t.  I had to read my previous reviews about them to even get a hint about them.  Needless to say I plan on re-reading these (hopefully this year).

This entire series is a bit of a blur to me – I believe I binged it one month.  More specifically, I can’t remember ever finishing the 3rd book, but apparently I did (and I liked it the most out of the series?!?).  The series is about children who are born with two souls.  In this world, the second soul (the “weaker” one) eventually just vanishes.  However, some children, that doesn’t happen. Those children end up being taken away.  The main character in this series is one of those children.  She meets up with another two characters who are the same and they end up all getting caught and taken away.  The series then follows them on a journey.  The rest of the memories on this one are a little fuzz, and what I remember may be spoilers (not 100%) so I’ll just leave it at this in case anyone wants to check them out.

Yep, nope nothing on this one… something about the theme park? It’s a short story so you’d think I’d remember more…

So I never read the first one – definitely remember absolutely nothing about this one!  Apparently a good graphic novel though.

7. The Succubus Gift by B R Kingsolver

Well I do remember watching the TV Series Lost Girl which was about a Succubus, but I don’t remember reading this one.  I’ll assume it was when I first started watching the show and I just grabbed a book that sounded like the show.

8. Not Exactly a Love Story by Audrey Coulombus

Well everything I remember from this one is the title.  Clearly this is a story about a boy and a girl (based on the cover) that start out as friends (or acquaintances) and fight over the idea of liking each other.  But then in the end, they end up together, just as they should.

Again, another series that I don’t fully remember.  I remember something about a dream world and her having some sort of power.  Outside of that, no clue.

I haven’t read this since I was a teenage.  I remember liking it, but not much more. She’s a teenage that has information? that someone is after.  She then runs from this person (or people).  I truly don’t remember anything more – but it was one of the few books I actually read as a kid/teenager.

So that’s my list of ten – although looking over my Goodreads’ read list, I’m sure there are many more – I stuck to the top rated books.  I can’t even imagine how many more I don’t have much/any memory for with lower ratings.

Have you read any of these and actually remember them? What is a book that you remember really enjoying, but can’t remember what happens in it?  Let me know.

𝓑𝓸𝓸𝓴 𝓣𝓸𝓾𝓻
QOTD : How is your reading going so far this month?
QOTD: Is there a book or series you want to prioritize this year?
Today's my stop for the Bound by Firelight (Wickery 2) by @danaswiftbooks Book Tour, hosted by @tbrbeyondtours
QOTD: What's a book on your TBR that intimidates you?
I'm having a nice lazy Saturday morning, so let's have a nice, easy post 😆
QOTD: What are your weekend plans?
I'm already starting to pile up my romance and fantasy romances for next month.