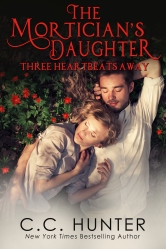 At least until they end up at Riley Smith’s door. Her latest spectral visitor is a murdered bride with a need for revenge, and not necessarily for the person who killed her. Never mind that killer is about to strike again. Riley’s determined to help, but is missing Hayden, the hot, ghostly boy who’s always had her back.

Living, breathing Hayden is awake, which means his spirit isn’t around to flirt with Riley anymore. Worse yet, the “real” Hayden doesn’t remember her. Their connection had been so strong. Did his feelings for Riley just disappear into the ether?

As Riley gets closer to finding the bride’s killer, other secrets are revealed: secrets that changes everything Riley thought she knew about her parents. But before she can completely unravel the mystery of her past, Riley will need to escape the murderer that threatens her future.

This is the third and final book in The Mortician’s Daughter series.  I am so grateful that I took the time to binge read this series.  You can find my reviews on Book 1 and Book 2 through the links.

This starts off right after book 2, Two Feet Under.  This one I found to be a little creepier than the other two.  The ghost is more gruesome in appearance and definitely angrier.  We learned in the last book that the angrier the ghost is the more they can control in the living world – and that just makes these encounters more intense.  I found some of the creepy factor wained about halfway through the book, as we start to understand the ghost more and we learn more about the mystery.  There were a couple of red herrings for the murderer in this book, one I was sure was actually the murderer because of how much he seemed to fit.  Then out of left field, we learn in the last 10% of the book who it was.  It wasn’t a surprising twist exactly and I wasn’t happy with who the murderer was, but at the same time it does make sense.

Riley is dealing with a lot in this book – all of which are spoilers from the previous books so I won’t go into detail with them.  But man, if I was her having to deal with these issues I would be in the same boat – just let me lie in bed and hide from the world!  But Riley doesn’t stay like that… well not for long, and she shows just how strong she can really be.

We learn more about Jacob, Brandy, Hayden, Kelsey and Dex.  Mostly, we learn a lot about Kelsey and we see Riley and her relationship grow.  I loved these added side stories and ended up being more interested in it than the murder mystery this time around.  It’s not that the murder didn’t have me curious, but I felt it wasn’t where I wanted to be this time – maybe I didn’t like the ghost *shrug*.

Overall, this was a nice conclusion to the series.  Everything was relatively wrapped up or we felt like it was heading towards a conclusion.  There are still a couple of things that are left open, but those are life long issues that can’t be summed up in an epilogue exactly.  I would definitely recommend this series to anyone who wants a fun, fast read.  This is definitely for those who enjoyed the Ghost Whisperer series and wanted a YA take on it.

Thank you to C.C. Hunter for reaching out and giving me the opportunity to read The Mortician’s Daughter.