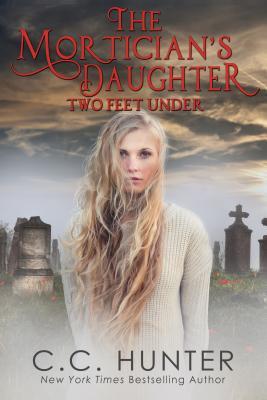 Title: Two Feet Under
Author: C. C. Hunter
Publisher: EverAfter Romance
Release Date: December 15, 2018
Page Length: 325
Genre: Paranormal Romance
Age Range: YA
Rating: 3.5/5
Goodreads Synopsis: Riley has accepted that her special gift is to help dead people with their unfinished business. But she never thought she’d be tasked with helping the spirit of a convicted criminal who died in prison. He may lead her on the scariest mission yet, but helping him could mean saving the life of a child. The convict’s daughter needs a liver transplant and the one person who could still be a match is his brother…who also happens to be a gang leader.

Hayden’s not happy that Riley’s discovered who he is and is seeing him sick and unconscious in his hospital bed. This feels like as good a time as ever to cross over and put all of them out of their misery….but Riley is in danger. She’s visiting some of the most dangerous spots and confronting some of the creepiest low-lifes in town. For her, he’ll need to regain his strength and fight to keep her safe.

But dealing with other people’s problems still can’t keep Riley from her own. Her dad’s drinking has gotten worse. And she’ll soon learn it’s because he’s been keeping a huge, horrible secret that will change everything she believes about her family and her mother’s death.

Two Feet Under starts right after the events in One Foot in the Grave.  We are still following Riley as she slowly learns more about her ability and more about her life.  Again, this was another fast-paced book, but I enjoyed this one a little more than the first.  I found it to be less predictable – I only semi predicted the twist ending.  There was also less of a mystery aspect to this one.  I’d call it more of a quest of sorts.

First off, Riley is visited by one new ghost in this story.  He seems to have more powers than the others too.  There were some intense moments where he put Riley directly in danger.  However, he isn’t all bad.  We slowly learn about his past while we search for his brother in order to save his little girl.  This littler girl pulls on your heart strings to boot – I just loved her little, positive attitude when we get to see her in the book.  As we try to find Mr. Brook’s (the ghost) brother, Riley puts herself in danger.  Despite these highly dangerous scenarios, Riley seems to be relatively unscathed – I would be dying!

Hayden is still very much present, although not as much as I would like.  He shows up to talk to Riley about the plans to find Mr. Brook’s brother and to keep her safe, but there is less of the banter from the first one.  This does make sense since his story has become more series.  Jacob is still in the picture too… full of puppy-dog eyes and I honestly hope there is less of him in Book 3 – I know that wont happen though because of this ending.  I just find he doesn’t add much to Riley’s story at the moment, other than to be the middle person (either telling Kelsey something or being told information by someone else and confronting Riley).  I don’t dislike the guy, I just really prefer Hayden.

Riley’s dad is more conflicting in this book.  He seems to be more overprotective in this one, which could be directly related to his drinking. But he also provides more information about Riley’s mom.  I want to know so much more about her! But it seems that she has even more in common with Riley than just her beautiful looks.

I’m loving this series and can’t wait to start the next one.  If Two Feet Under is any indication, I’m going to love it even more!

Thank you to C.C. Hunter for reaching out and providing me with a finished copy of Two Feet Under.  I look forward to the conclusion to the series.

3 thoughts on “Review: Two Feet Under by C.C. Hunter”