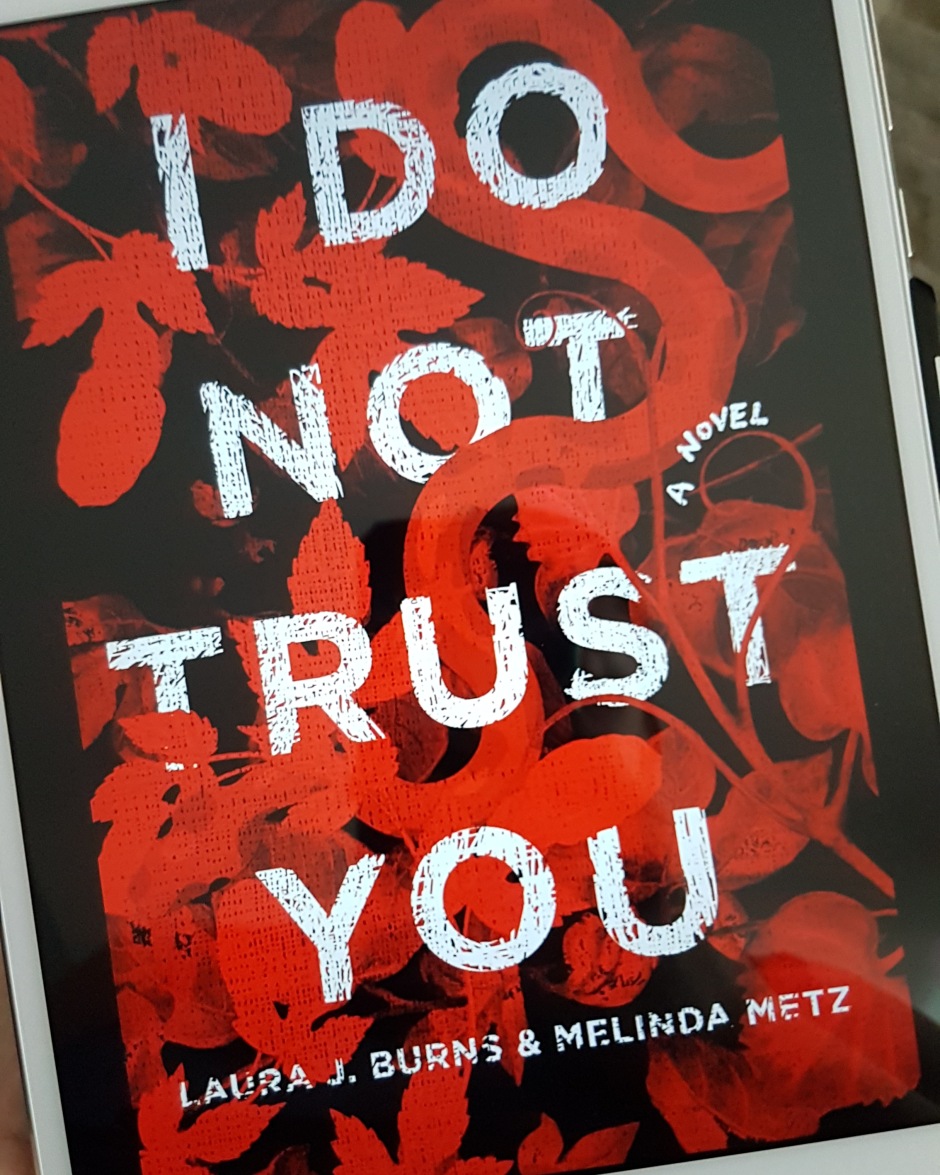 Title: I Do Not Trust You
Author: Laura J. Burns and Melinda Metz
Release Date: September 11, 2018, Wednesday Books
Page Length: 320, eArc
Genre: Mystery/Thriller, Mythology
Age Range: YA
Rating: 3.5/5
Synopsis: Memphis “M” Engel is stubborn to a fault, graced with an almost absurd knowledge of long lost languages and cultures, and a heck of an opponent in a fight. In short: she’s awesome.

Ashwin “Ash” Sood is a little too posh for M’s tastes, a little too good looking, and has way too many secrets. He desperately wants the ancient map M inherited from her archeologist father, believing it will lead him to a relic with the power to destroy the world. M obviously can’t trust him.

Equally desperate to find the relic for reasons of her own, M forms an uneasy partnership with Ash. From the catacombs of Paris, to a sacred forest in Norway, to the ruins of a submerged temple in Egypt, together they crisscross the globe in their search. But through it all, M can never be sure: Is she traveling with a friend or enemy?

In their latest collaboration, Burns and Metz prove once again the magic that happens when two talented mystery authors work together. Going on M’s journey will have readers’ hearts race with every page. With its dangerous secrets and dark mythology, I DO NOT TRUST YOU is irresistible to any fan of YA thrillers.

I received this eARC from the publisher in exchange for an honest review.

I got huge Indian Jones and Tomb Raider vibes from reading this book from the beginning! And trust me, that is not a bad thing!  M is funny and sarcastic at times, but super smart!  I’ve always been interested in mythologies, but wow, her knowledge is unbelievable!  Ash, from the start, I wasn’t too sure about.  He was mysterious and we are lead to believe he wasn’t to be trusted.

On M and Ash’s adventures, we travel the world!  So many interesting places and the number of theologies and mythologies that are linked to those areas are just interesting.  There were many times where I would read something and then open up a browser to search more about that myth!  In the beginning, there was more time dedicated to the area.  The story took its time developing where we were and covered more mythology (or at least that’s how it felt).  Closer to the end, let’s say the last quarter of the book, it felt like we were rushing through the areas, which only left me wanting to know more.  The rushing makes complete sense in the context of the story, but there were still times where I thought “no wait, go back! I want to know more!”

This story is written in third person, but still goes back and forth between perspectives of M and Ash.  It took some getting used to, when they switched perspectives, but it was possible.  If I could change it, I would have a heading indicating who’s perspective we were reading from.  It would have saved me attempting to get my barrings.  There were moments where I thought I was reading from M’s perspective, only to be a page or so into the chapter and realized it was actually Ash’s – which of course changes the attitude of who the story is read.  This wasn’t breaking, but it did tend to throw me off at times.

Another element of the story that I wasn’t fond of was the magic.  Without going into spoilers, there was a magical element that I didn’t feel fit into the story.  Well, I guess that’s not true.  It fit, in context.  I just didn’t feel like it was necessary.  I would have liked the story more if there hadn’t been that added element.  Like, imagine you’re watching Indiana Jones and out of nowhere we learn that Marion Ravenwood can talk to animals.  That’s not what happened in this story, but the magical element felt out of place, just as that would have.

Those negative aspects did not take away from the book enough to make it unenjoyable.  I had fun going on the adventure with M and Ash.  I enjoyed learning more about Ash’s history and learning about all the different mythologies.  At no point did I want to put the book down out of frustration, which lately is an achievement.  I actually had a hard time putting the book down, at points fighting sleep just to get to the next chapter.

Overall, I highly suggest I Do Not Trust You.  Especially to those who enjoyed the Indiana Jones or Tomb Raider movies, and really even the Mummy (Brendan Fraser’s version not Tom Cruise’s).  The characters were enjoyable and you’ll find yourself learning throughout the book.

“You should’ve seen Miss Memphis here get into it with
Nick last period,” Brianna said, squeezing in between M
and Inez at their usual spot in the cafeteria. “She shut him
down with her crazy ancient cultures voodoo.”

M shrugged. “I wouldn’t try to debate him in Physics. I
just know more about Rome than he does.”

“She’d debate him in German, in German,” Brianna
joked. “And if he tried to fight back, she’d switch to Greek.”

M threw a French fry at her. “I can’t help it. I grew up
speaking different languages.”

“And learning about pharaohs. And becoming well
versed in the history of the Etruscan people,” Ayana said,
putting on a fake accent that was probably supposed to be
British. “Oh, and setting broken bones in the bush.”

“That only happened once,” M muttered. Her friends
laughed.

“Anyway, it was epic. Thanks,” Brianna said. “I can’t
stand fighting with people, and Nick always goes after me.”

“You think he’s coming to the party tonight?” Brianna
asked.

“Probably. Everyone else is,” Inez replied. “Even Memphis.”

M made a face. “Anything to get out of the house. Bob and
Liza would expect me to play board games with them
otherwise.” Her friends exchanged a glance. M winced. “No
offense.”

“Oh, were you offending someone?” Nick piped up from
behind her. “Good girl.”

Immediately Bri looked down, while Ayana rolled her
eyes. Inez just smirked, glancing back and forth between M
and Nick.

“I was not offending anyone. I only meant I don’t like
parties,” M said. She didn’t bother to turn toward him. It
didn’t matter; he inserted himself onto the bench next to her
anyway. A little tingle ran up her spine as the scent of his co-
logne hit her nostrils, spicy and warm.

“Mmm, they’re boring. Everyone talking about the prom
or the senior trip or whatever. I’m over it,” Nick said.

Me too, thought M, wishing she didn’t agree with him.
She loved her friends, but even they were all about high
school. M just didn’t care. High school was nothing more
than what she had to get through before she could leave.
After the crash, after the shock of Bob and Liza becoming
her guardians, she’d asked if she could go off to college early,
either Boston University or the University of Sheffield in
England. Both had the kind of archeology program she
wanted and would’ve let her in with no questions. They
knew her father. They knew high school was a waste of time
for someone like her.

But her guardians said no. They said she needed stabil-
ity and normalcy after losing her dad. Never mind that
traveling the world and taking care of herself was normal
for her. While she and Dad technically lived in Boston,
she’d never spent more than a few months there during the
school year. They traveled. Half the year spent on digs. She
missed it.

“What’s with this thing, anyway? Is it to fight off bad
guys?” Nick teased, finding an excuse to touch her. He
reached for M’s collapsible bo staff, tucked in the inside
pocket of her jacket like always. But before he touched it, be-
fore his flirty smile registered in her mind, M had already
grabbed his hand, twisted it back to the breaking point, and
used the pain to push him off the cafeteria bench and onto
the floor. With her other hand, she whipped out the stick and
shoved it up against his throat.

M froze. He’s just hitting on you. Her friends were aghast,
and everyone nearby watched, openmouthed. Nick’s eyes were
wide with panic.

“Freak,” he muttered, climbing to his feet. He glanced
around, noticing the barely concealed laughter from onlook-
ers. “Jeez, I just wanted a fry,” he joked, as if he hadn’t been
humiliated, then hurried out of the cafeteria.

“What. The. Hell?” Inez asked. “He was flirting with you
and you beat him up!”

“I know.” M groaned, shoving her staff back into her
pocket. “I didn’t mean to. It was just reflex.”

Her friends were silent. She’d freaked them out. Should
she explain the years of self-defense and martial arts train-
ing? That she and Dad ended up in some rough places? Her
friends lived in a city, they understood danger. Sort of. In a
nice, upscale Boston kind of way.

M sighed. There was no point in trying to explain. No-
body understood her life.

“You kinda push all the guys away,” Brianna pointed out
quietly. “Maybe not like that, but still . . .”

“I don’t do romance,” M replied. She was done with love,
period. She’d loved her parents, and they were both gone.
Love hurt too much. It was better to steer clear of it.

They all ate in silence for a minute.

“I mean, he is an ass,” Ayana said finally. And everybody
laughed.

M: Like you never sleep in on weekends.
MIKE: Fine, your text woke me.

M: I don’t think that glyph is a lotus. It’s
bending the wrong way.

MIKE: It has to be a lotus. If it’s not, the
whole phrase is wrong.

M: The rest of the phrase never sat well with
Nefertum anyway.

MIKE: Your dad said it was a lotus.

QOTD: What duo authors do you love to read?
QOTD: How do you organize your shelves?
QOTD: Have you been watching any of the Olympic? Which event do you enjoy watching?
𝓑𝓸𝓸𝓴 𝓣𝓸𝓾𝓻
QOTD: Name a book that you know nothing about but own.
𝓑𝓸𝓸𝓴 𝓣𝓸𝓾𝓻
QOTD: The Tokyo Olympics started on Tuesday, with eh opening ceremony starting airing Friday. Do you plan on watching anything?
QOTD: Do you prefer to binge series or read them as they're released? 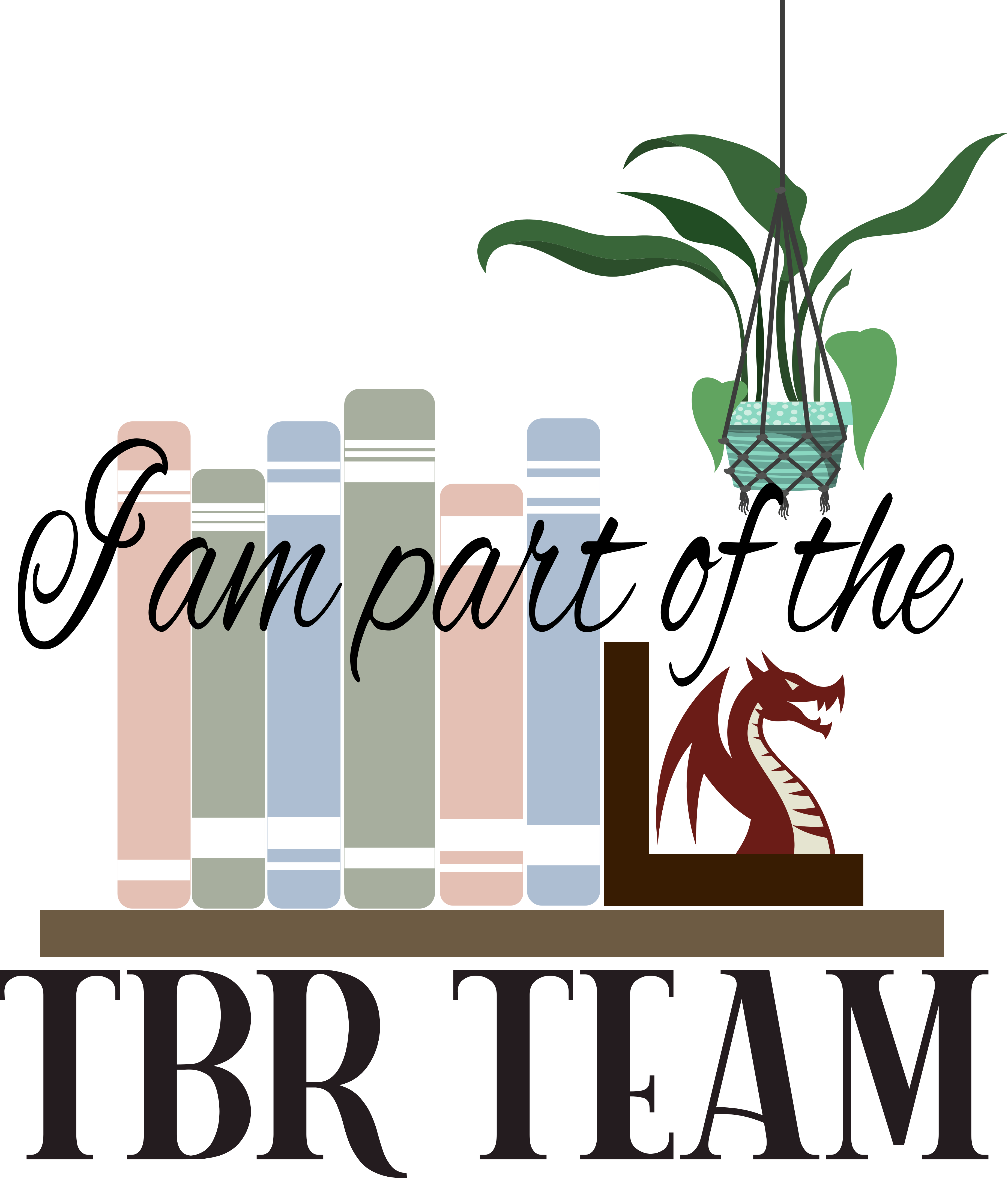