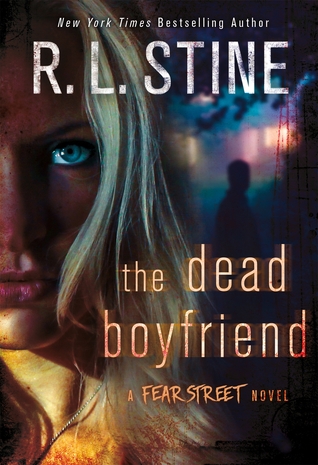 Caitlin has never had a real boyfriend before. When she starts seeing Blade, she throws herself into the relationship with fervor. She ignores her friends, who warn her that Blade may be a phony and that she is taking the whole thing too seriously. Caitlin is smitten. She doesn’t care if she loses her friends. All she wants is Blade.

When Caitlin sees Blade with another girl, she completely loses it. She snaps. Everything goes red. When she comes back to her senses, she realizes that Blade is dead—and she has killed him. But if Colin is dead, how is he staring at her across a crowded party?

I bought this book from Book Outlet a few years back because I have a bit of nostalgia towards the Fear Street novels.  I remember them being addicting with a bit of spook to them.  I had high hopes for this one and a couple others I picked up in the same haul.

Admittedly, this was a really quick read, so there was at least that.  However, that’s where my nostalgia memory connections stops.  This story is formatted closer to a diary style.  Well not entirely.  The only in

dication that this was a diary was that the main character constantly inserts “Diary” into the descriptors.  For example, there would be a confession and then something like “can you believe it, Diary”.  To be honest, the writing style in this one was very jarring and kind of obnoxious.  It writes like a normal story, then all of a sudden you’re reminded that it’s diary.  There’s conversation blocks and it’s writing format is set up as though it were a normal story style.  So your brain is constantly going back and forth trying to normalize whatever writing style was happening. It needed to be either a full diary entry OR a normal writing style.  I enjoy diary-style entries, but it needs to be committed.

The main character, Caitlin, felt flighty.  I couldn’t help but hear a valley girl voice in my head while reading.  That being said, there weren’t constant “like” and “OMG”s, but with the flaky, flighty personality the character projects from the beginning, the valley girl tone was very apparent to me.  I was not happy that she seemed to belittle her friends while describing them.  She would say things along the lines of “she would be pretty if she would lose a little weight” or be concerned about people not wearing makeup.  This seemed to be common practice in books I read in the 90s, but this was a more recent release and I had hoped we had moved away from that.

Caitlin also described herself as daring.  I felt she was just impulsive.  She went up and talked to a boy, then left with said by within minutes, then went to a random party with said boy, and finally made out with said boy.  This was all within one chapter of the book – so let’s say all within a couple of hours of meeting.  It doesn’t seem smart.  She also seemed to fall “in love” rather quickly.  I know the idea of love at 17 is different than when you get older, but falling in love in less than 3 months – and not just in love but completely obsessed.  She didn’t even go to school with the boy so she new nothing about him!  She finds out a secret of his and to me it didn’t seem surprising at all – what did you even know about the boy.  Or maybe it’s just my “oldness” showing?  I am almost twice her age I suppose.

I never truly felt terrified or nervous throughout the book.  That is what Fear Street is known for!  But by there’s more than a coincidental mention of magic or paranormal elements mentioned you’re more than halfway through the book. At no point did I truly fear for Caitlin’s life.  It didn’t seem to have the atmosphere right.  There was one part of the book where Caitlin is in danger, but there was no build up.  It was almost like the author thought “oh wait we need to have her randomly scared so she will do A so we can bring it up in scene 3”.  There was no true rhyme or reason for it.  Just completely out of the blue.  And sometimes that can work, but I don’t believe it payed off in this instance.

Ok so there is one part of the book I want to talk about, but it’s definitely a spoiler.  So if you don’t want to read about the “twist” then skip down to my final thoughts at the bottom.

So they have Caitlin confess to killing the boyfriend after finding out he was cheating on her (well really he was cheating on his girlfriend with Caitlin, but why go through technicalities).  She and Deena Fear were trying to bring him back to life – and succeeded – but now he was stalking Caitlin.  Anyways, she confesses to one of her friends who then tells her and Caitlin’s parents about it – because well it all sounds a little crazy.  This is when we find out in the diary Caitlin had changed her name and is really Cathy-Ann and she had been writing a novel the entire time.  She used everyone else’s real name, but changed her own.  So the “twist” to the entire novel was that it was a work of fiction, a novel.  We jump to a year later at her book signing (because of course she has a relative in publishing and it’s easy to get a book published *eye roll*).  They decided to throw in another “twist”. At the book signing the dead boyfriend asks for his book to be signed.  Dun, dun du. Yeah, none of these twist would be what I considered twists.  They weren’t impactful and made the reader (or at least me) feel like the entire thing was a waste of time.  If you got invested in the characters to then find out that it was all fiction to then find out that it, I guess, wasn’t – just doesn’t seem to inventive.

I have to admit, this is the first book, at least in a long time, that I skimmed a large portion of the book.  I wasn’t enjoying it, but I wanted to finish it.  I kept thinking, and hoping, that the book was worth it.  That something impactful would eventually happen, that it would all pay off in the end.  I was very disappointed.  I didn’t like the characters. The author’s attempts at plot twists were boring and uninspired.  Really, overall, I didn’t find it was worth my time.  Yes, like I said, it was a quick read – I read it probably in about 5 hours (I have a hard time judging since I get distracted while reading and I didn’t time it).  But that doesn’t mean the book had to be boring! I have read books quickly and thoroughly enjoyed it – I felt a need in this book to skim!  It felt like nothing ever happened and when something did it had been chapters! since something last happened.  I will give the series another try, mostly because I bough another one in the same haul so I figured I may as well read it.  I’m hoping this was just a one off for the failed attempt at a relaunch of what I remember as a very good, interesting series.